Large gatherings are banned in Delhi and security has been tightened in the heart of the national capital as the Congress plans to take out big pan-India demonstration against inflation on Friday. The party is also planning to hold ‘Chalo Rashtrapati Bhawan’ march in the city.

The Delhi Police has not allowed holding of any demonstrations with the security in key areas of the city already having being tightened in view of the Independence Day celebrations next week.

“Section 144 CrPC has been imposed in the entire area of New Delhi district except Jantar Mantar. Protest/ dharna/ gherao in any area of the New Delhi district on August 5 (Friday) cannot be permitted in view of security, law and order, (and) traffic reasons,” a statement shared by ANI quoted the police as saying.

As Congress started warming up for the stir, cops were seen trying to control crowds.

Share With Your Friends If you Loved it!
Related tags : delhi india Order of India 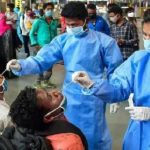